Blinded by the dollars

If you were a traveling businessperson, looking for a fun  place to go for food and an evening of drinks and possible entertainment with local flair, I would suggest the Tavern downtown, or the Bar and Grill farther north near the airport. Both have great food, excellent wine lists and full bars. They have local 'regulars' who make the evenings fun, Windsor's version of 'Cheers'.

I bring these up, because they were both promoted in a local fundraiser for the High School. Spend an evening out and these establishments, and they will donate a percentage of the revenues to the school to help with Graduation expenses.

A mailer was sent out, but there was a problem.

Contained in the envelope from the school was a letter from the High School Principal announcing an event to raise awareness of the dangers of drinking and driving. It talked of the thousands of deaths and what the school was doing to educate the students.

The following four pages were fundraisers, two for jewelry, and two promoting an evening out at these establishments for 'dinner'.

I think it would be interesting to have local law enforcement there with breathalyzers at these establishments testing the drivers of those who 'supported' the schools, and offering rides home to those who fail. I bet you the results would be very sobering.

Next time, may I suggest more family oriented restaurants like Friendly's or Bart's? Just a thought. 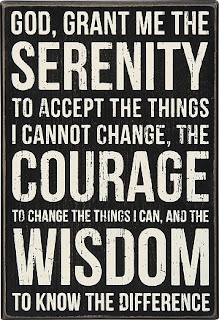 According to Wiki - The Serenity Prayer is the common name for a prayer written by the American theologian Reinhold Niebuhr (1892–1971). The best-known form is:
"God, grant me the serenity to accept the things I cannot change, Courage to change the things I can, And wisdom to know the difference."
Serenity with yourself, and with others and with some sort of higher power, giving us a greater purpose, a good formula for life.

Serenity with me... Means looking in the mirror and smiling, being content with who and what I am, being humble to my limitations, and empowered by capabilities and relationships that enhance my experience.

Serenity with others... Means acknowledging there are 7 billions flavors of humanity, 7 billion opinions, 7 billion sets of fears and mine is just one of a vast collective. You gain knowledge and empathy by asking questions and listening, not by moving your own mouth.

Serenity with God... Or Buddha, or Allah, or Messiah, or a "Power of …
Read more

If I were to describe this past two years it was like "transforming" From a ugly green caterpillar who eats toxic leaves and spews brown crud ... To a much more appealing creature that floats above all that, flutters away from it and sees things in a whole new way.

I won't bore you with life as that green slug, the were lots of great moments, but a lot of toxins ingested crawling slowly along the way.

This past year started off with a wonderful awakening of a spirit that I had shunned for various reasons for decades. It brought with is a peace and calmness that I have never experienced before, like walking into the eye of a hurricane where all around you there is chaos, but your area is awash in sunshine and calm.

I have been blessed with many tools to help me carry that calm with me, wherever I go. From that brightly lit center, I now see many things a lot different. I look at what is "normal" around me, and discover that it is not normal at all.

I have chang…
Read more